After Turkey (see article), also Pakistan has finally joined the 1980 Hague Convention on Civil Aspects of International Child Abduction, becoming the 96th Contracting State to the Convention.
The historical decision was taken by the Government during the cabinet meeting held in Islamabad on November 23, 2016 and ratified a month later (on December 22, 2016).

Pakistan in 2013 designated a judge to the International Hague Network of Judges (IHNJ) specialised in child and family law matters, the Honourable Mr Justice Tassaduq Hussain Jillani, former Chief Justice, Supreme Court of Pakistan (now retired). Justice Jillani also served as co-Chair to the Working Party on Mediation, established in 2009 within the “Malta Process,” to facilitate the development of mediation structures to resolve cross-border family disputes. The Malta Process promotes co-operation with countries with legal systems influenced by or based upon Shari’a law, for the international protection of children and the resolution of complex, trans-frontier family conflicts. 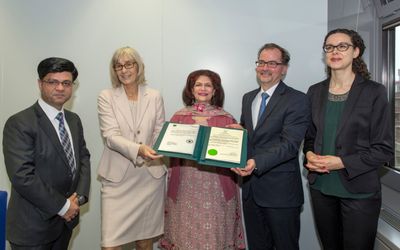