Hearing of the Child: age and maturity are not the only factors to be taken into account, but refusal to hear the child who wants to be heard must be well reasoned

The ECtHR had a recent occasion to further clarify the relevance of the hearing of the child as a fundamental human right. In the recent case Iglesias Casarubios and Cantalapiedra Iglesias v. Spain of 11 October 2016, the ECtHR was asked to determine whether the lack of hearing the daughters of a divorcing couple at any stage of the domestic divorce proceedings was in violation of the Convention. Differently from previous cases* the Court assessed here the situation against Article 6 (rights to a fair process) instead than the usual Article 8 (right to family life).
In this case, Mr Casarubios (hereinafter: the father) applied to the Spanish court for judicial separation. In a judgment delivered in June 2000 the court granted the judicial separation, awarded custody of the two minor daughters to Ms Casarubios (hereinafter: the mother) with shared parental responsibility, and granted the father a right of contact. Later in time, the father was condemned for injuries and threats to the mother and the daughters, while the mother was condemned for threats and for manipulating the daughters. Thus, the father’s right of contact was suspended in 2003, 2004 and 2005. In 2006 the father instituted divorce proceedings. The mother opposed them for economic reasons and for obtaining the sole parental responsibility of the daughters. However, the mother’s opposition was rejected. 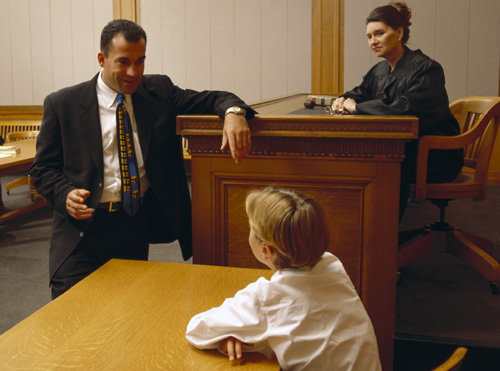 Pending the relevant domestic proceedings for divorce, the mother in different occasions expressly requested that the two daughters be heard by the judge. In fact, Spanish law sets 12 years as the age beyond which the child’s opinion must be obtained, provided that the child at stake is mature enough. At the time when the divorce proceeding started, the interested children were aged 13 years and 11 years respectively. At the time when the judgment of divorce was issued, the interested children were aged 14 years and 10 months and respectively 11 years and 6 months. At the time when the judgment of divorce was opposed by their mother, the children involved were aged almost 15 years and respectively 12 years and 3 months. Yet, the judge did not interview the children involved himself, but directed that the children were to be heard by the psychological unit attached to the court. However, the elder daughter requested the recording of her hearing by this psychological unit. This request was refused by the same unit and therefore in the end the hearing of the children did not take place. Thus, the children wrote two letters to the judge, complaining that during the proceedings for their parents’ divorce he had not personally interviewed them and that he only knew of their relationship with their father through other people. The judge did not reply. Therefore, the mother and her two daughters seized the ECtHR, complaining of a violation of Article 6 on the right to a fair hearing of the ECHR on account of the refusal of the domestic courts to hear the children in person during the proceedings for their parents’ divorce, and the failure of the domestic courts to respond to their request.

The ECtHR at first decided on the admissibility of the application, noticing that this was lodged by 3 persons, the mother and the two daughters. Yet, in the case at stake the only parties to the domestic divorce proceedings where the mother and the father, while the daughters acted merely as third parties. Therefore, the daughters had no rights in the divorce proceedings, including that to be heard in person by the judge. This right in fact belonged to the parties of these proceedings, namely the mother. Thus, the ECtHR declared inadmissible the daughters’ application to assess a violation of their allegedly existing right to be heard in person by the court. In contrast, the ECtHR declared admissible the mother’s request to assess a violation of her right to a fair trial because of a lack of hearing her daughters in person by the Spanish courts (para. 23 ff.).

On the merits, the ECtHR unanimously held that there had been a violation of Article 6. In line with its previous case law, the ECtHR affirmed that the domestic courts cannot be expected in all cases to hear the child in person. This decision is determined by the national court having regard to the particular circumstances of each case and to the age and maturity of the child involved. Yet, when the child requests to be heard by the judge, the refusal to hear him or her shall be adequately reasoned.

In sum, the court may consider that a child shall not be given the genuine and effective opportunity to express his or her views during the proceedings. This may happen for instance when the child, despite being of an appropriate age and maturity, is not capable of forming his or her own views because he or she has been manipulated by one of the parents. In those cases, however, if the court refuses to hear the child, it shall document its considerations in its decision (para 36).
Thus, the ECtHR concluded that the mother’s fundamental right to have her daughters heard by the courts in person was violated by the domestic courts.

* Previous cases on the same matter

ECHR “Casarrubios” on the Hearing of the Child: age and maturity are not the only factors to be taken into account